The Little Owl (Athene noctua) is a bird which is resident in much of the temperate and warmer parts of Europe, Asia east to Korea, and north Africa. It is not native to Great Britain, but was first introduced in 1842, and is now naturalised there. It was also successfully introduced to the South Island of New Zealand in the early 20th century.

More photos at the botom of this page:

This species is a part of the larger grouping of owls known as typical owls, Strigidae, which contains most species of owl. The other grouping is the barn owls, Tytonidae.

The Little Owl is a small owl, 23-27.5 cm in length. It takes prey such as insects, earthworms, amphibians, but also small birds and mammals. It is partly diurnal and often perches prominently during the day.

This is a sedentary species which is found in open country such as mixed farmland and parkland. It usually nests in holes in trees or rocks, laying 3-5 eggs which are incubated by the female for 28–29 days, with a further 26 days to fledging.

Little Owls will also nest in buildings, both abandoned and those fitted with custom owl nest boxes. If living in an area with a large amount of human activity, Little Owls may grow used to man and will remain on their perch, often in full view, while humans are around.

The adult Little Owl of the most widespread form, the nominate A. n. noctua, is white-speckled brown above, and brown-streaked white below. It has a large head, long legs, and yellow eyes, and its white “eyebrows” give it a stern expression. This species has a bounding flight like a woodpecker. Juveniles are duller, and lack the adult’s white crown spots. The call is a querulous kee-ik. 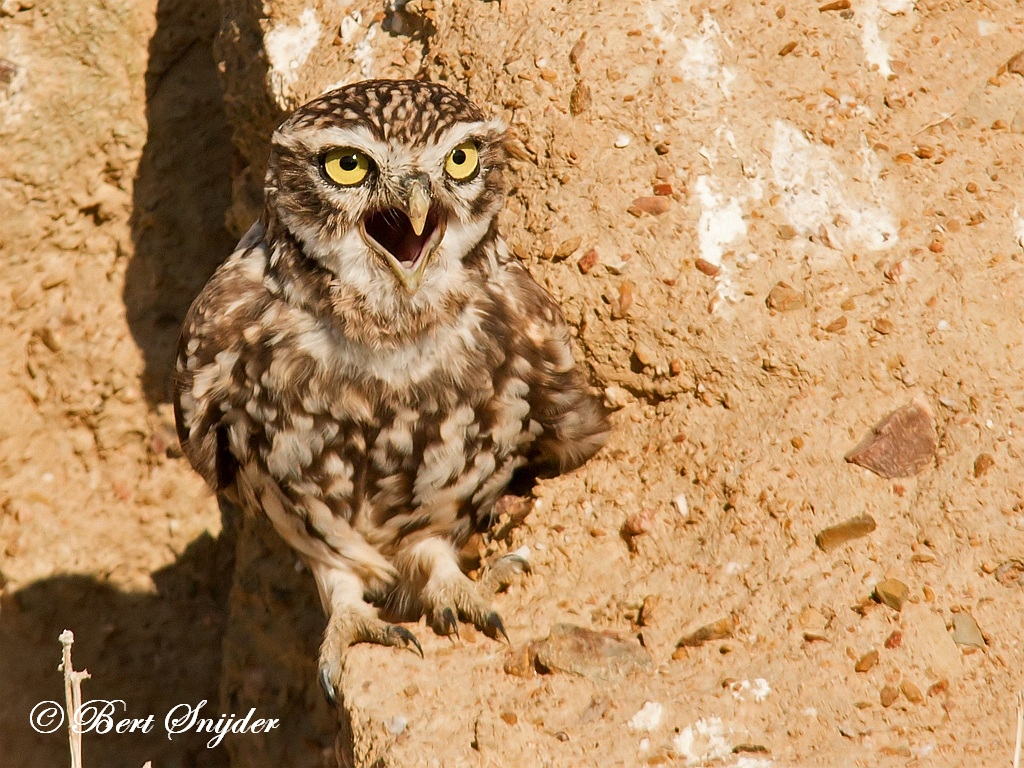