The Eurasian Hobby (Falco subbuteo), or just simply Hobby, is a small slim falcon. It belongs to a rather close-knit group of similar falcons often considered a subgenus Hypotriorchis.

Adults are slate-grey above with a dark crown and 2 short black moustachial stripes. The throat is unstreaked white, thighs and undertail coverts are unstreaked rufous and rest of the underparts are whitish with black streaks. Close views enable the red “trousers” and vent to be seen. Sexes are similar. Juveniles are generally much browner, with scaled upper parts and streaked buffy thighs and undertail coverts.

The Hobby has a distinct first-summer plumage.

This species breeds across Africa, Europe and Asia. It is a long-distance migrant, wintering in Africa and Asia.

It is a bird of open country such as farmland, marshes, taiga and savannah. They are widespread in lowlands with scattered small woods. It is an elegant bird of prey, appearing sickle-like in flight with its long pointed wings and square tail, often resembling a swift when gliding with folded wings. It flies powerfully and fast. It will take large insects, such as dragonflies, which it transfers from talons to beak and eats while soaring slowly in circles. It also captures small bats and small birds like swallows, swifts, pipits etc. in flight.

Its speed and aerobatic skills enable it to take swallows and even swifts on the wing, and Barn Swallows or House Martins have a characteristic “hobby” alarm call. It is known to harass swallows while they are roosting and dispersing from roosts. When not breeding, it is crepuscular, hawking principally in the mornings and evenings. While on migration, they may move in small groups.

Hobbies nest in old nests of crows and other birds. The tree selected is most often one in a hedge or on the extreme edge of a spinney, whence the bird can observe intruders from a considerable distance. It lays 2–4 eggs. Incubation is said to take 28 days and both parents share in this duty, though the female does the greater part.

It is a very bold and courageous bird and was used in falconry, trained to hawk birds like quails, larks, hoopoes, drongos etc. 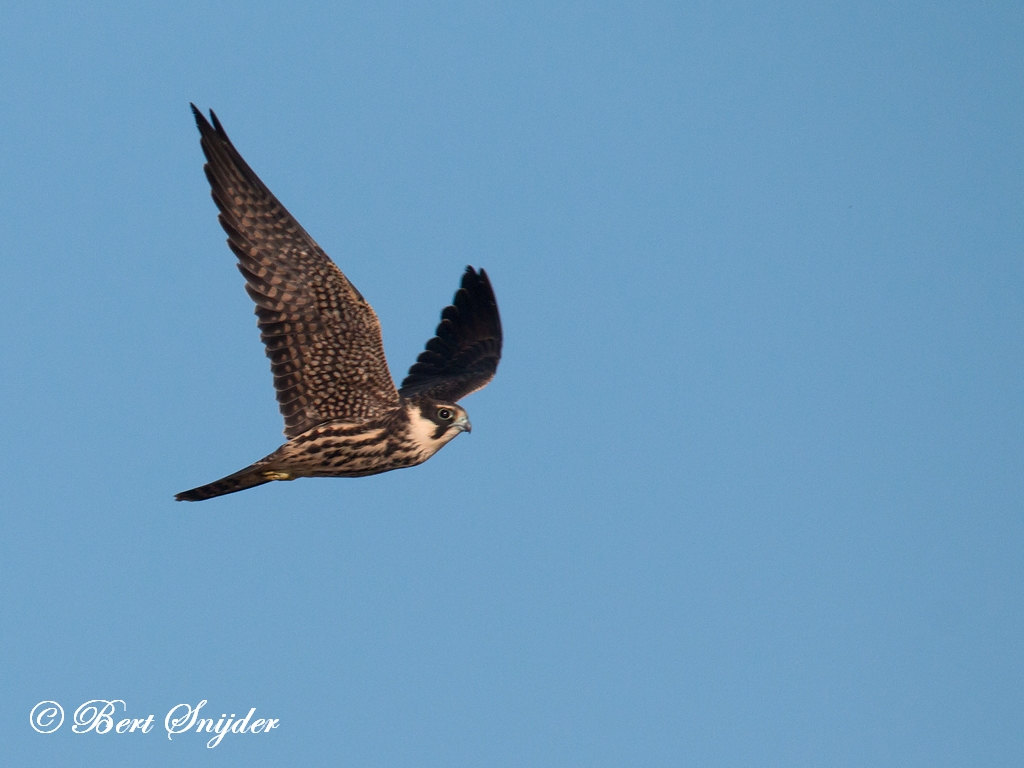