The Black-necked Grebe, Podiceps nigricollis, known in North America as the Eared Grebe, is a member of the grebe family of water birds. It occurs on every continent except Australia and Antarctica.

More photos at the bottom of this page.

The Black-necked Grebe is 28–34 centimetres (11–13 in) long. The adult is unmistakable in summer with a black head and neck and yellow ear tufts. In winter, this small grebe is white with a poorly defined black cap, which distinguishes it from the crisper-looking Slavonian Grebe (Horned Grebe in America).

In courtship the male gives a mellow poo-ee-chk call to the female.

This species breeds in vegetated areas of freshwater lakes across Europe, Asia, Africa, northern South America and the southwest and western United States. The North American subspecies, P. n. californicus is known as the Eared Grebe (or “eared diver”). These birds migrate in winter, mostly to the Pacific Coast where they range south to El Salvador on a regular basis; vagrants may occur as far as Costa Rica.

Black-necked Grebes of the nominate subspecies P. n. nigricollis in the cooler temperate regions of the Old World also winter further south, with many European birds moving to the Mediterranean area. The isolated southern African race, P. n. gurneyi is sedentary. It was named by South African ornithologist and author Austin Roberts in honour of the English bankers and amateur ornithologists John Henry Gurney and John Henry Gurney Jr..

Sadly the large breeding population in County Roscommon, Ireland discovered about 1915 fell victim to a drainage scheme in the late 1930s; at its peak there were an estimated 250 pairs.

The Black-necked Grebe is an excellent swimmer and diver, and pursues its prey underwater, eating mostly fish as well as small crustaceans, aquatic insects and larvae. It prefers to escape danger by diving rather than flying, although it can easily rise from the water.

Like all grebes, the Black-necked Grebe nests on the water’s edge, since its legs are set very far back and it cannot walk well. Usually two eggs are laid, and the striped young are sometimes carried on the adult’s back.

Interestingly, the eared grebe is essentially flightless for most of the year (9 to 10 months), and serves as an example of one of the most inefficient flier among avifauna. Generally, this bird avoids flying at all costs and reserves long distance flight exclusively for migration. However, when migrating, it will travel as much as 6,000 kilometres (3,700 mi) to reach prosperous areas which are exploited by few other species. 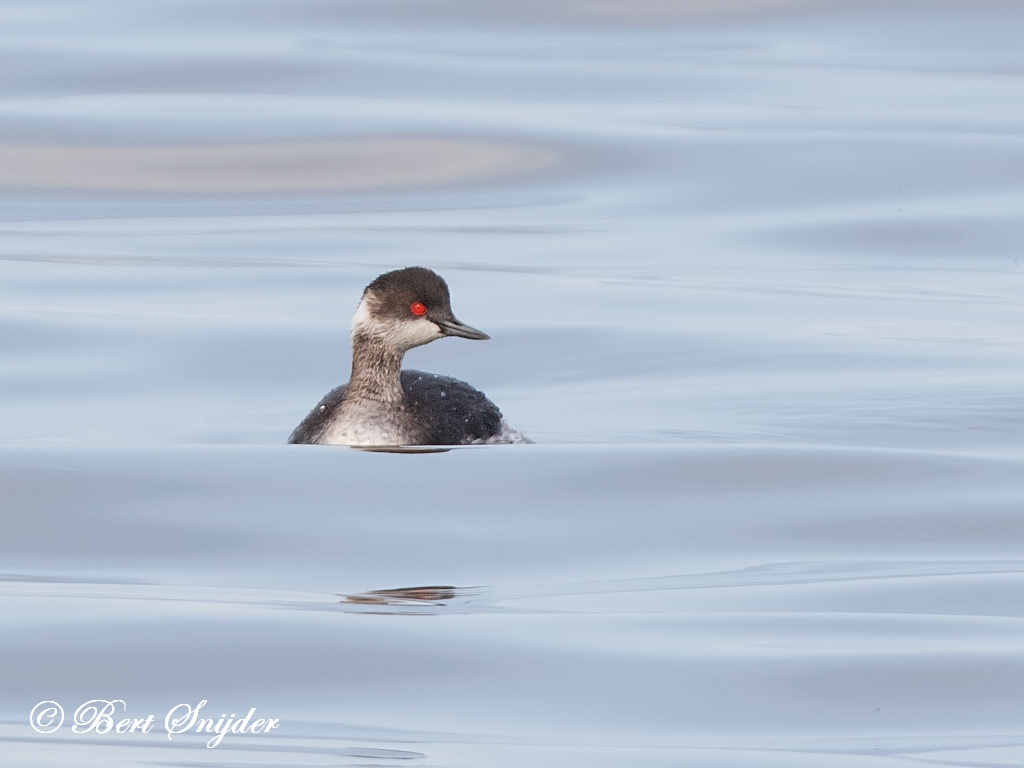